A few months ago I decided that I would sign up for a "fun run", the Blue Moon Run. The basics of the run is that you run on a trail in the middle of the night, with your only source of light being the light from the full moon and a glow stick that hangs around your neck along with what ever glow accessories you may add onto your outfit. 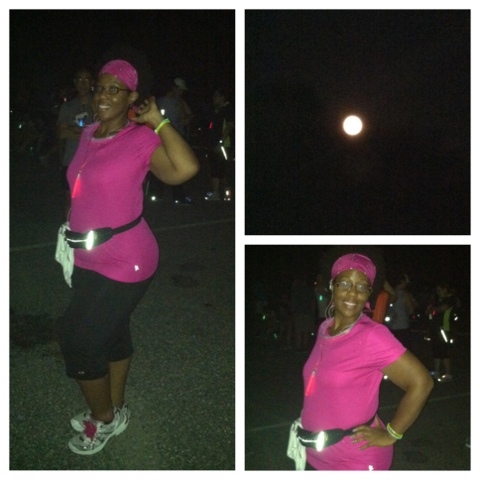 Though it was slightly scary being out there on the trail in the middle of the woods, with wild animals lurking around; it was rather beautiful. The pictures I took do the scenery no justice what so ever. The terrain was slightly gravelly and rolled a little underneath my feet but it was soft, all of which I'm not used to running on but my running partner and I ran it and we ran for 4 miles.

Sounds crazy? I know but I had to say that it was mad, mad fun. Just being out there running in the middle of the night and laughing at my over reaction to a glow stick that was thrown in the bushes. I swore it was green beady eyes of a ferocious creature and I was about to be Flo Jo Express and blaze a trail back to the finish line. LOL! See? Fun, big fun.

My only disappointment in the run was that there were promises of partying in the parking lot after the run. Granted they had a nice spread, those lemon cookies, yes I said lemon cookies touched my soul in a manner it has never been touched before and the plums gave me instant life. The water was warm and the Gatorade was watered down and warm blech...thank God I left a 32 oz water bottle in the car because what they provided was not getting it in the fluid department.

Will I do it again? I'm not sure if I will do it again. Right now I'm looking a head to the Glo Run...a serious fun run complete with glow in the dark tee shirt, a DJ and a real party in the streets of DC. Out of all the races I have left I'm looking forward to that the most.

After that...I'm going into training over the fall/winter months because my next goal is to get picked and register to run the Nike Women's Half Marathon that will be here in DC April 2013. I was never really interested in doing any type of marathon running but I have ingested more of the BGR! Baltimore Kool Aid than I thought.

Anyway folks, peace, many blessings and much happiness.
Posted by Running Is... at 10:00 AM

Email ThisBlogThis!Share to TwitterShare to FacebookShare to Pinterest
Labels: running